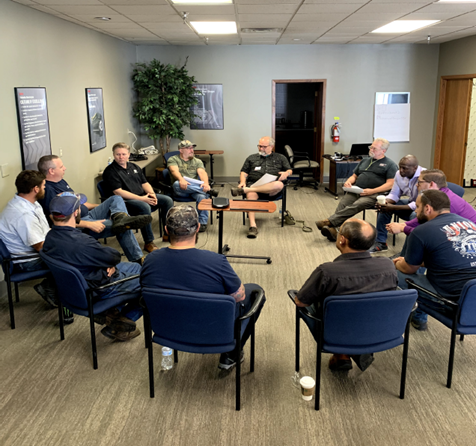 They’re strangers, but not in the typical sense. They’re people you’ve known for years, but mostly behind the professional veneer of the work environment. They’re people that you’ve never allowed yourself to be vulnerable with; conversations are sterile. “You’re bringing people together who don’t often come together in a circle—unguarded—where they are asked to participate in a conversation,” Shaun Fuller, Fairbanks Morse Vice President of Strategy and Growth, explains, “there can be a lot of anxiety.” Don’t worry, it won’t last long.

“After about 10 minutes of getting the anxiety out of the way by talking about the meaning of the book,” he continues, “we stop talking about the book and start talking about the stuff of life.” Now, the people that surround you are no longer strangers, they’re no longer colleagues, your juniors, or your boss—you begin “viewing people like fathers and mothers and human beings,” Shaun says, “they’re people that coach a little league team, maybe they’re struggling in their marriage—there is no hierarchy, it’s just people.”

Developed to deepen workplace social connections and bolster a team’s effectiveness, the Books@Work program has taken root and flourished since coming to Fairbanks Morse in August of 2013. Having a vested interest and serving as an advocate in the success of the program, Shaun notes that “part of the reason we do Books@Work is to build community, break down walls, and to work in a way that we can appreciate each other’s backgrounds and diversity.”

As a member of several company groups, including the Fairbanks Morse Executive Committee, Human Resources Department, and the Quarterly Operations Leadership team, Shaun has been with the program since its inception. Asked what session has been the most impactful, Shaun says, “they’re all impactful and each one seems to be more impactful than the last.”

In preparation for each session, participants read a selected piece of fiction and consider how the themes, characters, conflicts, resolutions, etc. relate to their personal or professional lives. “The more diverse the perspectives you get in the room, the more takes you get on the story,” Shaun says. Despite the name of the program, however, it is not always about reading books.

Perhaps unexpected for a newcomer to the program, Shaun explains that “the book is not the thing at all, it’s just the vehicle to the conversation.” The carefully selected readings do not serve as the subject of the conversation, but rather encourage discussions through their messages. “This is not a way to test the comprehension of the material,” Shaun explains, “whether or not they have read the book, they should still be able to participate in the discussion.”

Just as the Books@Work program is not always about reading books, it is not always about the discussion, either. Sometimes, it is simply about people. Shaun likens it to the message of a recent short story he read, “The Use of Force” by William Carlos Williams, a title that readers of this series may recall from a previous article. “Maybe it’s the recency bias,” Shaun says, “but that was a really impactful session.” For him, the story spoke of how myopic we can be in our interactions with others. In the story, “the doctor approached the girl just like a patient—like a problem to be solved—and it’s so easy to approach coworkers as someone that needs to give us something so we can get our jobs done,” Shaun explains, “it’s very transactional.”

Asked what that meant for his interactions with others, Shaun says, “it’s helped me to see people not as tools or transactional and it’s helped me to build relationships and community with the people that I spend the most time with.” Seemingly unphased by the reality of his thoughts, Shaun adds, “In any given week, I spend more time working with my direct coworkers than I spend talking to my wife; this has become a tool through which I have gotten to know them better.”

Reminiscing over his impression of the story, Shaun wonders what impact experiences can have on a person depending on how they’re approached. For example, even though the doctor’s intention was to help, his methods may have affected the little girl for the rest of her life. Consistent with how the Books@Work reading selections encourage self-reflection, Shaun wonders, “How often do I, as a leader, really contemplate using a little more finesse in my communications and how I deal with difficult issues and slowing down the decision-making process?” In his time in the program, Shaun has changed how he sees people and himself and says, “to every interaction, I am able to bring a level of connection and empathy that is hard to do if I don’t know that person more intimately.”

Of all the descriptions of the Books@Work program—community, teamwork, self-reflection, social connections—none of them truly gets to the heart of the program because none of them are possible without allowing yourself to be vulnerable. “This is a community setting that is confidential,” Shaun describes, “in order for people to exhibit and have the courage to be vulnerable and share a little bit about themselves, it’s necessary for us to maintain confidentiality.” In the privacy of the group, there are times of real awareness, “it takes courage and vulnerability, I’ve seen a number of moments like that,” Shaun says, “there’s magic in that moment.”

If you are interested in seeing what it’s about, come check it out, “the company will support you,” Shaun says. Contact Shaun Fuller at shaun.fuller@fairbanksmorse.com or Kerry Harriott at kerry.harriott@fairbanksmorse.com to get involved with the program. “If it’s something that would help better connect with your coworkers, what’s stopping you from trying?”

Books@Work continues to encourage the Fairbanks Morse mission of powering the world forward.