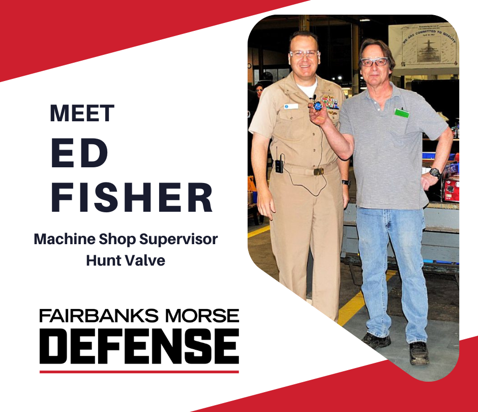 Get to Know Ed Fisher of Hunt Valve

Two days after his high school graduation, Ed Fisher punched in for his first shift at a
machine shop in his hometown of Salem, Ohio. Jimmy Carter was the president. The
movie Star Wars won six academy awards. And the song “Stayin’ Alive” by the Bee
Gees flooded American airwaves. Forty-five years later, Fisher is still punching in at
Hunt Valve, which engineers, manufactures and services valves for the defense,
industrial and energy industries.

As the company’s longest-tenured employee, Fisher has worked nearly every job
possible within the company. The machine trade skill classes he took at Salem High
School prepared him to be a union machinist, his first job. He then spent years on
different shifts and in different supervisory roles before stepping into his current position
as Hunt’s machine shop supervisor. His career with Hunt has allowed him to earn a
good living and raise a family, all within three miles of his childhood home.

For Fisher, having staying power means committing to success despite industry shifts,
and changes in ownership and management. While those changes haven’t always been
easy, he said adapting to change is part of what makes the job rewarding. It’s never
boring, and there’s always an opportunity to learn something new.

With decades of hands-on experience, Fisher has grown to become someone
employees now seek out when they have suggestions or need something changed. He
has an open door, encourages employee engagement, and is eager for a continued
uptick in business as FMD expands. Fisher’s service to Hunt, and by extension – to the U.S. Navy                                            – hasn’t gone unnoticed.

Last year while touring the shop, U.S. Navy Rear Admiral Tom Anderson presented
Fisher with one of his military coins, a gesture of appreciation for Fisher’s hard work
and commitment to excellence. During the site visit, another Salem High grad, Susan
Mainwaiting, summed it up best when she told the Salem News that “Ed’s contributions
can be tied back to thousands of valves in service across the Navy fleet.”
Fisher may not have left home, but after a lifetime of service to the company, his work
sure has traveled far.