Fairbanks Morse has launched a new version of its two-stroke opposed-piston engine, with its sights set on the distributed generation and CHP markets. The new engine, the Trident OPTM, rated at 3.335 MWe (900 rpm, 60 Hz version)/3.705 MWe (1000 rpm, 50 Hz version) boasts a mechanical efficiency of 48-50% and is described as “best in class when compared to leading medium speed engines.” It has twelve cylinders, each containing two opposed pistons.

Two-stroke opposed-piston engines have inherent efficiency advantages stemming from the absence of cylinder heads, which means the combustion chamber has a lower surface-area-to-volume ratio than a conventional engine, and the fewer strokes per cycle compared with a four-stroke engine. There are also less moving parts and a reduced overall part count compared with a four stroke engine with its four valves per cylinder. Optimised heat transfer losses, leaner combustion, advanced timing and reduced pumping power have further contributed to increased efficiency.

Noting that “affordable reliability is of critical importance for base load power generation”, Fairbanks Morse says that the “Trident OP bypasses minor overhauls that other high or medium speed engines require around 20 000 hours

and can run for 40 000 hours until the first major servicing.” 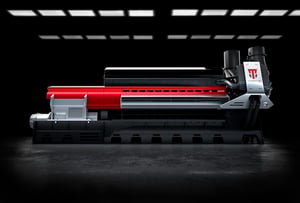 In addition, the engine has embedded smart sensors and controls that communicate in real-time to the new Fairbanks Morse PoweReliability-as-a-Service platform – a cloud-enabled, condition- based mon

A further advantage of the opposed piston configuration is that counter-rotating crankshafts (one above the cylinders and one below) and counter-reciprocating piston assemblies inherently balance the engine, resulting in lower vibrations and greater reliability, contributing to increased time between overhauls.

Independent engineering consultancy Ricardo was commissioned by Fairbanks Morse to estimate total cost of ownership for the new engine. “The Trident OP has lower total life cycle cost for most scenarios where a significant amount of fuel is expected to be consumed,” said Mark Kuhn, vice president, Ricardo Strategic Consulting. “For example, in a typical continuous power generation scenario with an annual uptime of 8 500 hours, the lower operating cost of the Trident OP engine pays off in less than two years. Even with reduced annual operational time down to 1300 hours, the Trident OP engine is still less expensive to own and operate than a conventional high-speed engine.”

Fairbanks Morse says PoweReliability-as-a-Service “reduces risk and operating expenses for end users who want to generate their own power – whether remote, off grid, or grid-tied.”

In the case of a 10 MW Trident OP based power plant, for example, Fairbanks Morse projects that the new platform will achieve $35 million in lifetime savings from reduced fuel consumption and increased reliability.

“Coupling the launch of our ground-breaking Trident OP engine with the PoweReliability-as-a-Service platform is the next evolution in Fairbanks Morse’s long history of providing affordable and reliable distributed power generation. This platform-based approach will allow us to accelerate our corporate mission to deliver power where it is needed most,” says Marvin Riley. “This first-of-its-kind solution enables our customers to become reliable independent power producers – even in the most remote areas of the world that do not have access to a dependable grid.”

Fairbanks Morse notes that currently some 1.2 billion people lack access to power and another billion only have access to intermittent power. Emerging economies are expected to see around 41% growth in energy demand by 2040. On the other hand, in the USA, energy demand is flat, an aging grid and an apparent increase in superstorm frequency are also engendering power reliability concerns, with nine of the 12 most expensive storms in US history having happened within the last three years. In both situations, says Fairbanks Morse, “decentralised generation, independent power production, and microgrids are seen as the enablers needed to drive reliable power in the new energy economy.” As a result, Navigant Research estimates that annual distributed generation capacity additions will outpace centralised generation three-fold by 2024.

“Generator manufacturers like Fairbanks Morse are pushing disruption by providing new platform-based solutions that are efficient, flexible, and leverage remote monitoring, controls, and predictive analytics”, says Adam Forni, senior research analyst, Navigant Research. “This platform-based approach is transforming the way electricity is produced and consumed globally. The result is an emerging grid that is cleaner, more distributed, and increasingly intelligent – also known as the Energy Cloud.”

The PoweReliability-as-a-Service platform is enabled by cloud- based bi-directional data flow and control so that power generation can be monitored in real time to deliver on specified fuel and reliability guarantees. As an open platform, it can be customised to include the integration of distributed energy resources (DER) such as renewables, combined heat and power and energy storage.

Fairbanks Morse believes its PoweReliability-as-a-Service platform will enable independent power producers and commercial & industrial end users to integrate the distributed energy resources of their choosing to operate fully as an independent microgrid or, where available, participate in ancillary services markets such as demand response.

Meanwhile, another developer of opposed piston technology, Achates Power (which has had a joint development and licensing agreement with Fairbanks Morse since 2013, and has contributed to development of the Trident OP), has received funding from OGCI Climate Investments.

This is the billion dollar investment arm of the Oil and Gas Climate Initiative (OGCI), a CEO-led initiative of ten major oil and gas companies aiming “to lead the industry response to climate change.” OGCI Climate Investments was established in November 2016 and the Achates opposed piston engine is one of the first technologies to receive its backing.

This article was written by Modern Power Systems. View the original article here.