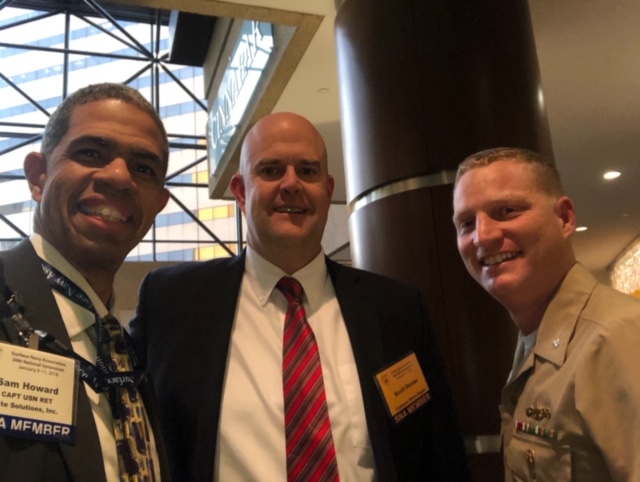 Serving Those Who Served Series: The Legacy Continues

United States Navy Rear Admiral Richard H. O’Kane, USN, recipient of the Medal of Honor for valor as commander of the USS Tang in the South Pacific during World War II, wrote extensively about the value of Fairbanks Morse Engines in submarine operations, in his 1977 memoir “Clear the Bridge!- The War Patrols of the USS TANG.”

“Tang’s engines were Fairbanks Morse, and if anything could get us there, with enough battery capacity for an approach, it would be these rock crushers.  They did.  Forty minutes after surfacing we dived, well ahead of the enemy….Someday I’ll visit Beloit, Wisconsin and tell them about their engines.”

Scott Davies, former Captain of the USS New Orleans and current Director of Sales, Aftermarket Services and Solutions at Fairbanks Morse, highlighted this quote to emphasize how important the people who work at Fairbanks Morse are to the U.S. Navy and, more importantly, how significant their job has been for generations to helping power our nation forward.

“The people who work here understand why their jobs are important,” said Davies. “They provide critical power in critical applications – whether it be for a U.S. Navy ship, Coast Guard ship, a Military Sea Lift vessel or back-up power to a nuclear power facility or hospitals – they realize many times, livelihoods, and on some cases, even lives are at stake through their product.”

“This realization shapes their attitudes on how they conduct their work and it affects every effort to deliver the highest quality of service,” said Davies.

For nearly a decade, Davies has worked at Fairbanks Morse.  After retiring from the U.S. Navy in San Diego, he began his career as Sales Manager. It was during this time that he was given the opportunity to travel and visit many international Navy customers.

“The most interesting experience was my time spent in Taiwan,” said Davies.  “The customer was maintaining and operating submarines that the U.S. built at the very end of World War II.  Fairbanks Morse engines powered the entire ship, not just for emergency use, but the entire ship’s power.”

“Supporting these accounts and seeing our original product still providing critical power to a submarine built in 1944 was really exciting,” said Davies.  “For some people, it’s unbelievable that these engines are still powering these vessels as we speak.”

Today, Davies’ role at Fairbanks Morse is to manage a team of Outside Sales Managers in the Aftermarket Services group, who are in his words, “the voice of the customer of the aftermarket portion of our business.”  Davies added, “Not only are they responsible for maintaining close relationships with the customer and understanding their requirements and their needs, they are responsible for promoting Fairbanks Morse’s products, services, and solutions across the industry.”

“One of the really big things that our customers value is the support,” said Davies,  “We know the main value is the support of the product after its been delivered – whether it’s a services center in Houston for the oil and gas industry or having subject matter experts in the Navy both remotely, as well as in the field in San Diego, Seattle, Norfolk, Va. and Cochrane, Canada. – our services technicians keep our products updated and ready to perform. The sales managers are responsible for keeping abreast of their market needs and driving sales within the company,” said Davies.

As a veteran, Davies knows first-hand that the work done by Fairbanks Morse is important.

“During my time in the Navy, we had Fairbanks Morse engines and they operated extremely well,” said Davies.  “On USS New Orleans, the fuel consumption had drastically decreased. We could go farther without refueling and we won the fuel conservation award.”

By working at Fairbanks Morse, Davies understands that it is also an easy transition from the military to civilian life.

“Those who have worked in the military and who want to remain in touch with this experience can do so by combining the business side and manufacturing side of the job,” said Davies.

“We are more than another defense contractor.  We are a partner with our customers and they rely on us and our services to provide critical power,” added Davies.  “This partnership is evident in the frequent interaction with our team.  Attending FM training, visiting our facility, and most recently, the Navy’s decision to name a ship after the city of Beloit.”

When asked what he thinks about the namesake of the USS Beloit, Davies was thrilled to say, “I absolutely love it! It’s a big honor.”

“My experience is that the smaller the community the better engagement and the greater the buy-in,” added Davis.  “This is exciting news for all of us and the city of Beloit.  It is great for the community to be recognized and have the honor of having a ship named for their city.”

Outside of work, Davies was proud to mention the fact that his son, Sam, is graduating this year from college and will be joining the Navy via the ROTC program.

“Working for Fairbanks Morse has given my son the perspective to understand industries support of our Navy. Fairbanks Morse provided a natural continuation after my career in the Navy and serving on the USS New Orleans.”

Davies concluded that by having a career in the military, there is a good chance that veterans will find Fairbanks Morse is a good resource “to leverage experiences gained in the military and have the ability to continue to serve our nation in a different role, a valiant role.”

“What’s fun about Fairbanks Morse is that there is enough new stuff to accelerate learning,” said Davies.  “I have always been fulfilled working here. It’s been a privilege.”