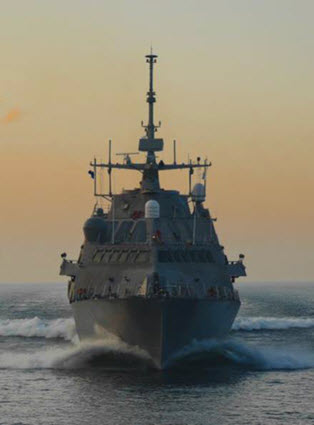 The people of Fairbanks Morse Engine in Beloit have their own reasons to be proud of the USS Milwaukee (LCS 5), the United States Navy’s newest littoral combat ship, which was built in Marinette, Wis. and is being commissioned in Milwaukee on Saturday, Nov. 21.

Fairbanks Morse employees built the two large diesel engines that are part of the main propulsion system of the ship. The two Fairbanks Morse Colt-Pielstick 16-cylinder engines combine to deliver 17,380 horsepower – more power than the engines in 40 semi-truck tractors. With a displacement of 325 liters per engine, these are some of the largest diesel engines built in North America.

The 389-foot-long-USS Milwaukee normally operates with a crew of 54 and is capable of speeds up to 45 knots. Littoral combat ships are built to operate close to shore and to quickly switch from one combat mode to another by changing out different mission modules such as anti-mine or anti-submarine equipment.

“It’s very special to have contributed to this ship which was built in our home state and bears the name of our state’s largest city,” said Fairbanks Morse President Marvin Riley. “This is another chapter in our proud history of service to the United States Navy. Fairbanks Morse Engine has supplied the Navy with battle-tested diesel engines for marine propulsion and ship service for more than 70 years. Our engines continue to deliver power for the Navy’s most critical ships operating in the most extreme conditions.”

About Fairbanks Morse Engine
Fairbanks Morse is the critical power solutions expert – a strategic partner and a trusted source for application-specific, fuel-flexible power systems that deliver optimal performance in mission critical applications. These applications include power generation in base load and standby power plants, and emergency back-up power for nuclear plants, as well as ship propulsion and shipboard power for the United States Navy, the Coast Guard and commercial vessels. Fairbanks Morse reliable engine drive solutions also can be found in a wide range of municipal, institutional and industrial applications. More information is available at www.fairbanksmorse.com.

About EnPro Industries, Inc. (NYSE:NPO)
EnPro Industries, Inc. is a leader in sealing products, metal polymer and filament wound bearings, components and service for reciprocating compressors, diesel and dual-fuel engines and other engineered products for use in critical applications by industries worldwide. For more information about EnPro, visit www.enproindustries.com